THE TALE OF VISITING MUZUNGU

Mzungu? If you’ve ever visited Africa then you’ll know that Mzungu is a term used by Africans to refer pleasantly to white people. Why the title? Well Jenny Cleeton is my daughter who is currently spending a gap year in Kiwangala, Masaka District, Uganda, and has a blog called ‘The Tale of a Lost Mzungu’ which can be read at http://jennyinuganda.blogspot.co.uk/

In the last issue, Jenny gave an update on her time in Uganda since September 2012. We have been in contact with Jenny using Skype and don’t rely solely on her blog to keep us up to date. My step-daughter, Michelle (from Crook of Devon) and I decided to go a step further and visit Jenny in Uganda. In March 2013, via Heathrow, we flew from Edinburgh to Entebbe, where we were met by my very excited daughter. Having arrived at midnight, we were driven to Kampala to our hotel. The sights and smells at this hour did not prepare us for the norm when daylight woke us the following morning. 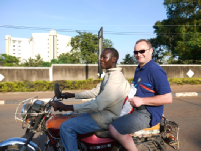 The first thing noticeable was traffic and the lawlessness of the roads. The disorganised chaos that somehow works left me in no doubt that I would never hire a car in this city. Secondly the number of motor bikes stopping to offer us a lift, without helmets, was overwhelming. This was my introduction to ‘boda boda’s’, the local term for these motor bikes. Boda boda’s are easily the quickest and most economical way to get around, if you can come to terms with wearing no helmet and the madness that boda boda drivers use to get from A to B.

Prior to getting onto a boda boda Jenny insisted in negotiating in Lugandan with the drivers for the best deal. Whilst I was charged 3000 Ugandan schillings, she and Michelle were charged 5000 Ugandan schillings for doubling up. Sounds a lot? This equates to 75p and £1.25 for a journey that our beloved taxi drivers at home would easily have claimed was worth at least £10!

We travelled around Kampala, saw many incredible and wonderful sights; we visited the market, or perhaps it was the city centre, where you may have seen the ‘Top Gear’ team stop and buy equipment for their respective cars.

It is no different in reality; busy, a traffic logjam and very loud. The smells of cooking food, fumes, open drains, spices and coffee attract your senses, and are often overpowering, however this is the norm and only we noticed. On our 2nd day we didn’t notice either.

Kampala is busy 24 hours a day. The traffic is nose to tail always. Boda boda’s swerve in and out, go over pavements, up roads the wrong way and get you to your destination in one piece albeit with a frazzled nervous system. Between the boda boda’s and the visible armed guards at every bank and shopping centre you would be excused for being on edge.

It was a relief to leave Kampala to go to Jennys village, Kiwangala. Via the wacky races, that lasted 4 hours, taking us through the Equator and various
villages including the 7th largest town, Masaka, we arrived at Kiwangala. Quite simply, it was a shock. When you watch Comic Relief and see the suffering that goes on you are moved and often donate. To be there in person and witness poverty, deprivation, hunger, illness mixed with happiness, friendliness, gratitude and a very warm welcome left us humble. The kids frequently called after us, ‘Mzungu, Mzungu’ and want only to shake your hand or get a response. They are genuinely delighted we have visited them. Compare that to the ‘hoodies’ we tolerate that have everything, and duck their heads to avoid any form of contact – who is the more civilised? 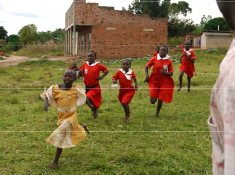 We were accommodated in a concrete building with more than one room, which is exceptional in the village and a tremendous offering. Having been taken to the Childrens Sure House, the school where Jenny works, we were bowled over by the kids desire to learn, to listen and to play. We witnessed the sports afternoon which consisted of all kids from P1 – S4 running about 8000 metres in 35C heat. They ran, they competed, they completed the run and they didn’t complain. Then they played football!

We experienced the walk to the well, about 1 km away, to get water, where a 10 year old local boy gave me a lesson on how to carry a 5 gallon jerry can on my head. I failed miserably and succeeded in  soaking those near to me as I dropped it, so I reverted to the Scottish way of swapping the can from hand to hand, putting it on my shoulder or a combination of those. Oh, and as the walk was uphill back from the well, a 2nd visit was required to wash away the sweat and tears.

Jenny and the other volunteers from Project Trust (in the village), namely Kate, Holly and Calum are incredibly patient, understanding and helpful. They have integrated into the village and are like family to many. They teach English, Maths, Science, Computing, Music and anything else asked of them.

Like Kampala on day 2, Kiwangala on day 2 was less shocking than day 1. However, this is probably because we knew we were another day closer to returning to electricity, running water, a toilet and a shower.

Ugandans are extremely friendly, speak English, drive on the same side of the road (sometimes) and are very respectful. In the village of Kiwangala we met people who have only a roof over their head and they are so grateful for that. Everyone we met is grateful that they are better off than someone else; that they don’t have malaria; that their kids have survived infancy; that they have something to eat that day. This is their norm. In the western world our norm is wall to wall TV, Internet access, chocolate, buses on time, a time to start work and a time to finish work. I could go on – we are not wrong; it’s just our norm.

All parents will understand the emotion of meeting their child after being separated for so long; leaving Jenny in Uganda was the hardest thing I’ve ever done in my life, particularly when you consider her living conditions. But, Jenny is happy, she didn’t want to come home as she is dedicated to her school, the village, to Project Trust and to completing her year. Certainly she was emotional at leaving her Dad and Sister for a 2nd time, but she couldn’t wait to get back to her village and her Ugandan family.

In one week in March I experienced almost every emotion that is possible. We left behind 75 kg of clothing, food, sports equipment and Scottish memorabilia which had been kindly donated, bought or supplied for the village. You would have thought we’d left the bank vault door open (not RBS vault, UK taxpayers will be pleased to know)!

Whilst we could give money and improve life in Kiwangala, unless you improve every village and every road in Uganda the money will benefit those who receive it in the short term, but will change very little long term.

Uganda is a beautiful country, with many friendly and helpful people, included in which are the wonderful volunteers who give up a year of their life to help those who don’t even know they need it.

I now have some realisation of the difficulties faced in the 3rd world, rather than just ‘as seen on TV’ and know that Uganda is not alone. If I ever needed reminding that we have no choice over where we are born, and what we are born into, this was it. Hopefully, I will keep my promise to myself to stop moaning about trivialities, and to never travel on a boda boda again.