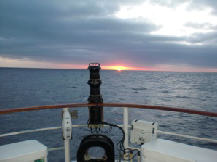 On the 16th March 2013 I left Abernethy for Edinburgh Airport to join a Tall Ship called SS Tenacious at the Prince Rainier Berth at the Monaco Port.

Although a little anxious about my ability to sail as part of the Voyage Crew on Tenacious I never the less had a real sense of excitement about what I had decided to do for a week in my life of retirement. I had sailed on Tall Ships as a much younger person when in the Royal Navy when doing my seamanship training on the south coast of England.  So was I trying to revisit my youth?  I was about to find out.

SS Tenacious is one of two ships operated by the Jubilee Sailing Trust (JST), the other being the Lord Nelson.  The JST operates as a charity and caters for people of all abilities. Therefore as part of the conditions to join the ship to sail between Monaco and Valencia, was a willingness to work within a team and help other less able members of the crew where required.

After a flight from Edinburgh to Nice and on by public transport to the port at Monaco, I arrived for boarding by 1600 (4pm). I was met by the 1st Mate and my watch leader, an old hand who had sailed with JST on numerous occasions. So after being shown my bunk space and a brief on location of the Heads (Toilets) and Mess (Dining) I became a member of the Aft Port Watch for the duration of voyage.

With all the Voyage and Permanent crew on board the 1st Mate (Steve) gave a briefing on the aims and all aspects of safety for the voyage ahead.  (One good thing was his advice to switch off all mobiles so as not to disturb other members who may be sleeping in between watches. In any case we would often be out of reach of any useable signal)

We spent the night docked at Monaco which gave us the opportunity to meet other members of the crew and to go ashore for a look at this small but affluent principality, before setting sail the following day.

I had chosen this leg of the ships voyage as I thought the weather would be a little warmer than sailing around the coast of Scotland. However we woke up next day to a wet and cold Monaco.  Before setting off  we were all on Deck to get our first opportunity of climbing the mast so that we could lend a hand to set the sails for our journey to Barcelona and from there to Valencia.

We were soon out of Monaco Marina and into open waters which were very choppy. With help from us novices, the sails were set and off we went on a ship that was definitely ‘Rockin an Rollin’. Needless to say there were a few missing persons from each watch as the not so well could only lie on their bunks to try and counter the movement of the ship.  Terrific weather for sailing but not for those yet to find their sea legs. The rough weather stayed with us for the rest of Sunday and Monday and Tuesday and then overnight the weather calmed and we woke up to a calm and sunny Wednesday morning on a heading for Barcelona.

The ship docked late morning into Barcelona where we would stay until the next morning when we would set sail for the last part of my time on the ship to Valencia.  This enabled all us non-permanent crew to get ashore to see the sights.

Barcelona has many sights to see but as we were only there for a short stay the majority opted to take the Red and Blue Bus Routes to see the city.  Stopping off at the centre where the Cathedral still under construction was quite a sight to see.  However as there was a large crowd waiting to get inside, the shipmates I was with, opted to sit with a beer on a surface that was not moving beneath our feet.  It was then back on the Bus to finish the tour and onto a restaurant to have a meal before returning to the ship for a good night’s rest before setting sail again in the morning.

Having departed Barcelona in the sunshine into a calm sea, the wind was unfortunately in the wrong direction for us to set the sails for our journey to Valencia.  As the ship had to be docked in Valencia on Friday evening there was not enough time to sail there.  As you will appreciate, unless the wind is in the direction of the journey, use of the wind available requires the ship to tack to catch the wind which would not have got us to the Port of Valencia for our docking time. So we had to revert to engine power for the remaining leg of our journey.  However, after the stormy start we all took the opportunity to enjoy and relax in the sunshine.

Also, now that the calmer weather was with us there was time, when not on watch, to get together in the Mess deck for a Beer and a sing song.  It never fails to amaze me that wherever I go, there are always talented people within any group to entertain, who can play an instrument and sing which bonded us as shipmates and friends. Needless to say the Bar had strict hours for closing but never the less they were always very enjoyable get togethers and yes many a Sea Shanty was sung.

Reaching Valencia as planned on Friday evening we took advantage to go ashore for a meal as this would be the last opportunity to get together and say our goodbyes to new friends before departing on Saturday morning for home.

After a delayed flight because of the bad weather in the UK I finally arrived back in Abernethy on the 23rd, tired but with a feeling that I had experienced something very special.

Would I do it again?  Looking back my main thoughts are how lucky I am when I saw those less able in their wheelchairs and those with various impairments showing a determination to be involved and part of every day’s sailing.  Whilst it is the aim of the Jubilee sailing Trust to provide this opportunity, it is truly wonderful to see it working and being enjoyed with very few limitations on those taking part.  So yes I hope to be able to do it again.  There is no age limit for anybody wanting to do this.