In a previous issue of “The Crier” I explained how I had disposed of my large collection of theatre programmes to spare them the indignity of being consigned to the wheelie bin when I am no longer around. There were however one or two that I was reluctant to part with. Following the Hungarian uprising against Soviet domination in October 1956 the Queen’s cousin The Hon. Gerald Lascelles formed a committee to set up a Hungarian Relief Fund. One of the main events was a one-off concert in the Royal Festival Hall on December 18th 1956 featuring the  Royal Philharmonic Orchestra under the baton of Norman del Mar with a guest soloist on trumpet who had flown over from the U.S.A. for the event. None other than Louis (Satchmo) Armstrong himself. It was my one and only visit to the venue described by one critic as being “like walking into a giant’s bedroom with all the drawers pulled out”, the drawers in question being the boxes.

The programme included works by Brahms, Stravinsky and Liszt but the main attraction was the great man himself splendidly attired in a midnight blue suit of tails and backed by a group of British musicians including Scotland’s own George Chisholm on trombone and Jack Parnell on drums.  Backed by the full orchestra they played concert versions of “St Louis Blues” by W C Handy and Louis’ signature tune “Sleepy Time Down South” plus various jazz classics from the smaller group. The concert overran by 45 minutes with the audience demanding encores and Louis duly obliged with items such as “Mack the Knife”. In addition to the programme I also have the issue of the “Melody Maker” containing the full report of the concert. An unforgettable evening at which I was priveleged to be present. It was not the first time that I had seen Louis as earlier that year he had appeared at the Kelvin Hall circus arena in Glasgow when the supporting bill included the Clyde Valley Stompers and Annie Ross (sister of Jimmy Logan) a well known jazz singer. I saw him again at the Odeon in Glasgow in 1959 but undoubtedly the most special occasion was in May 1962. I had scrounged a lift to London for a week-end with the GA football team, who were playing their annual friendly match with their London counterparts, as I had obtained tickets for the FA Cup final through the kind offices of a friendly stockbroker. The GA match was played in the morning followed by lunch and I hitched a lift from the referee to catch a tube to Wembley where I cheered ‘Spurs on to a 3-1 win over Burnley. On my return to the hotel late in the evening I was gutted when Davie Miller told me he had spent the evening watching Louis and his All Stars at the Finsbury Park Empire. Imagine my surprise when we got home to Perth on the Monday when I found that I was one of five lucky winners of two tickets to see Louis perform at Ibrox Stadium in a competition run by the “Daily Express”. Unknown to me it was my wife-to-be who booked the train tickets to Glasgow for myself and my pal to see the show. We had seats in the front row of the stand and at the interval I, along with the other four winners were conducted down the famous marble staircase to meet our idol. As we waited we could hear him blowing a few practice notes in the dressing room. He passed quickly along the line and there was barely an opportunity for a “high five” let alone a handshake but at least I could boast that I had been in the presence of greatness. We were all presented with an autographed photograph which is still one of my prized possessions. 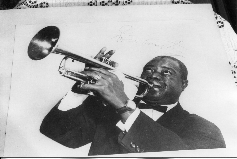 In these days of political unrest and uncertainty, terrorism, war and famine it is hard to believe that it is “A Wonderful World” that we live in but I just have to listen to Satchmo’s gravelly tones to almost believe it.