In normal circumstances unlike what we are going through in these troubled times, holidays allow one to relax and leave the day to day worries behind. That is the theory. It doesn’t always work out that way as I have discovered over the years. One of my first holidays in the immediate post war years was spent in Aberdeen. Along with my friend and work colleague Dick Paton we enjoyed our week during the summer so much that we decided to book another holiday in the same boarding house in September. It was a mistake. The landlady was unwell and delegated the cooking to her daughter which was not up to the standard of her mother. Worse still, the weather was miserable. One rainy day we sought refuge in a music shop in Union Street, the idea being to play some records in the booth supplied for prospective buyers. The records were in rather untidy and not too stable piles on a large table in the middle of the shop. Making our selections we had just turned away to head for the booth when we heard a loud crash behind us. Our blood turned cold as we visualised what was left of our holiday money having to cover the cost of the broken records as they were the old 78rpm bakelite type which shattered if dropped. On turning round we found that a large section of the ceiling had crashed down just where we had been standing. The staff were more concerned for our welfare than a batch of broken records.

My next holiday disaster was on my first visit to Spain. My destination was the lovely resort of Sitges on the Costa Dorado just south of Barcelona.

Arriving in the middle of a thunderstorm with the plane being buffeted about and the ground below resembling a paddy field was bad enough but arriving at my hotel in the middle of a power cut was even worse. With power restored and having been assured that it hadn’t rained since May the sunshine returned and I was really enjoying the holiday until one day on my return from the beach I decided to have a quick shower prior to dinner and another night on the town. The bathroom overlooked the roof of the hotel and the window was slightly ajar. As I bent down to clean out the sand between my toes a slight breeze blew the window further open as I arose. It caught me in the small of the back and came off the hinges, shattering as it landed on the side of the bath. Treading my way through broken glass I made myself decent and headed down to reception to report this disaster. Thankfully, like the staff in Aberdeen they were relieved that I had escaped injury apart from a bruise on my back.

Fast forward about thirty years with a wife and three daughters to my name. Our first - and last - holiday in Europe by car was also the last fam 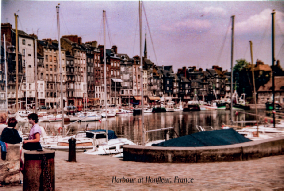 ily holiday that we all spent together. We had booked a caravan near the picturesque port of Honfleur in Normandy. It was a lovely holiday punctuated with minor disasters which could easily have been much more serious. Our mode of transport was the Volvo which I had purchased in order to tow the horse box. It might have been a good idea to have attached the horse box to accommodate the girls thus sparing us the regular “Are we nearly there?” questions. The overnight journey to Dover w 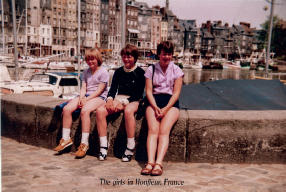 ent well and we negotiated the circular road around London without getting lost. Stopping at Canterbury for fuel I was surprised to see the local General Accident office just across the road. This may have distracted my attention as I omitted to replace the petrol cap. However we managed to acquire a plastic substitute at Dover. Boarding the ferry the exhaust made contact with the ramp and although the damage was minor our progress was noisier than it had been before the impact. Leaving the ferry we joined the line of cars with GB plates as instructed. The first worry came passing through Lille. Unused to traffic lights suspended above junctions I am sure I drove through at least one when the light was at red. That was nothing compared to when we hit Rouen. After one or two attempts to find the route we wanted the kids asked “Where are you going Dad?”. My reply was “Anywhere to get the hell out of here”. We landed up in the middle of a forest. Calming down and studying the map we eventually found our way out. Finding ourselves driving alongside the River Seine we r e a l i s e d we were on the w r o n g side so we continued until we found a b r i d g e . Needless to say it was a toll bridge. Not having needed to use our currency which was tucked away in a folder in Isabel’s handbag there was a bit of a delay before we could pay our way and proceed. A near miss which could have had severe consequences as we joined a fast moving line of traffic gave me a bit of a fright but fortunately the kids did not notice. At long last we arrived at our caravan. A combination of tiredness and frayed tempers led to a cool atmosphere and I had the bed all to myself. C o r d i a l r e l a t i o n s resumed, we settled in to enjoy the holiday. As it was June and the holiday season in France was barely warming up it was not too busy. Parking was free and we spent time on the lovely beaches. A trip to fashionable Deauville with all the expensive shops led to an amusing encounter. We spotted a French family of husband, wife and two children. The husband was the spitting image of the late Barry Knight whose wife Helen served with me on the Williamson Hall Management Committee. On relating this to Helen on our return she remarked “I often wondered what he got up to on these business trips”.

A fairly long trip to see the Bayeux Tapestry was also on the agenda. Our plan was to continue on to the D Day beaches. Having difficulty in finding where we had left the car when we emerged from seeing the tapestry plus the fact that it was raining meant a change of plan. Wet and miserable we headed back to our caravan. I cannot recall if it was that day or another, when, on our return to the caravan we were met with a scene of devastation on opening the door. Broken glass was everywhere plus a strong smell of alcohol. A bottle of calvados which we had purchased and left in a cupboard had exploded with the heat during our absence. Just another disaster. A day in Paris was a must so we set out early one day with directions to an underground car park which was only a couple of stations on the Metro from the Arc de Triomphe. We made it safely and managed to fit in visits to the Eiffel Tower, Notre Dame etc plus a sail on the River Seine. Returning to the car rather later than we had intended we realised that we would be driving during darkness on our way back and we had not got around to fixing the black strips of adhesive paper to our headlights to avoid dazzling oncoming drivers. With the aid of nail scissors from Isabel’s handbag we cut the strips to size and stuck them on. We had more trouble finding our way out of Paris than we had getting in and had to withstand a few blasts of the horns of other drivers before we made it. By the end of our fortnight the noise from the damaged exhaust had almost reached an embarrassing level and I prayed that we could make it home before it finally gave way. An early start to catch the ferry back to Dover and negotiating our way round London by following a bus heading for Worksop and we were on our way north. Plain sailing from now on. Or so we thought. Roadworks on the M74 had led to some locals in the borders area taking a short cut down a short section against the flow of traffic to avoid a long detour, something they could only attempt late at night when traffic was light. This had led to a head-on collision involving Jock Stein the Celtic manager who was returning from Manchester, which almost cost him his life. It was just our bad luck to find ourselves confronted by a similar situation. Due to a gap in the barrier I was able to drive on to the section under repair and avoid a head on collision. Arriving home at 5 am the girls, who had slept during the journey, headed up to the stables to be reunited with their beloved horses. All I wanted was to go to bed.

This was the last holiday that we all spent together as a family with Jane in her mid teens feeling the need to spread her wings.