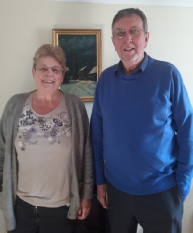 The family and life of Ian Bett embody the working history of Abernethy.

His Grandmother was Janet Powrie. The Powries were salmon fishers in the Spring and Summer. This photo shows Ian’s father, Archie Bett, t 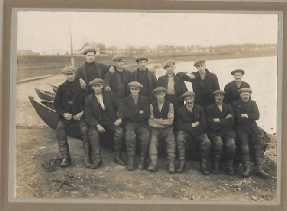 hird from the right on the back row. At the end of the nineteenth century the Powries were salmon Tacksmen. They rented the fishing on the River Tay between Newburgh and Perth and provided crews, boats and nets. Many men in the village worked at the salmon fishing and their kists would be carted down to Ferryfield from where men could be taken by boat to their seasonal stations. At the turn of the century they lost the fishing as farmers and landowners formed syndicates and more fish were left to go up river for sporting estates. The Powries then went to the Dee in spring, where this photo was taken, and the West Coast in summer.

Archie Bett was born in the corner house on the square, known as the Binque.  The shed next door where Clootie Mctoot’s  Dumplings now trade was the headquarters of the family business of carters, coal merchants and contractors. 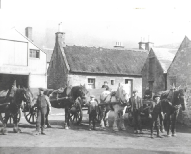 This photo is about 1918 as the house on the right was demolished to make way for the War Memorial. Ian’s Grandfather, Charles is holding the horse on the left. He died in his forties and Ian’s father, then in his twenties had to take over the business and responsibility for eight younger siblings.  He ran the business in winter and was away to the fishing in the spring. One of these horses might have been the one taken by Archie by train to Achnasheen via Inverness. Archie then rode him up Glen Docherty. They spent the night at the Loch Maree Hotel and continued to Laide on Gruinard Bay. The horse transported the salmon from the west coast fishing stations over rough moorland and tracks to Gairloch from where a boat took it to Kyle of Lochalsh then a train to Billingsgate Fish Market in London.

Ian was born in 1943 in a cottage in the close opposite the Square which was known as Bett’s Close and where his sister still lives. He was the youngest of seven children, five boys and two girls. He was educated at Abernethy Primary School and Perth Academy then joined General Accident Insurance as a Trainee Underwriter where he met his wife, Liz, and they were married in 1967.

When his father retired he took over the family business. He bought the first lorry and these gradually replaced the horses. The last horse retired about 1970. The yard was where the new houses are in Clunie Street.  All goods came in by railway; coal, beer, provisions and bolts of cloth for Clow’s factory. Carted to the station from Abernethy were potatoes, sugar beet to  Cupar and of course, raspberries. They also had raspberry fields all over Abernethy and cattle at Midfield. They collected the refuse and it was dumped along Hatton Road below the railway. 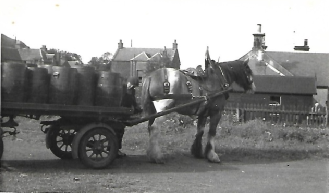 Competition from Europe and South America led to the decline of raspberry growing and Ian went back to the insurance business. He joined Wesleyan Insurance and became the Collections Manager for Scotland. He and Liz had two boys, Stewart, who gained prizes for showing cattle whilst at Midfield before going into farming and Alan who went into publishing in Edinburgh .

Ian was part of a group on the Williamson Hall Committee who ran an annual Burns Supper and then formed the Burns Club of Abernethy in 2004. He is also Past President of Perth Burns Club and the Kinross Jolly Beggars, which was founded by a great-nephew of Robert Burns. He is Past President of the Bowling Club and was twice Club Champion and played for the Perthshire team, both indoor and outdoor bowls. He was Right Worshipful Master of Lodge Abernethy Round Tower and received a certificate commemorating 50 years of membership from the Grand Lodge of Scotland.

Ian remembers when street lighting in Abernethy was by gas lamps which were lit every night. The tower bell rang every evening at eight o’ clock to remind children to go home to settle down for the night. The biggest change he has seen is the demise of raspberry growing. Abernethy  was surrounded by raspberry fields and there were a dozen full and part time growers.

He is very pleased that the influx of newcomers into the village has helped with the growth of so many thriving organisations including, of course, the Village Crier, which he helps deliver.

Finally Ian with his mother father and three brothers. 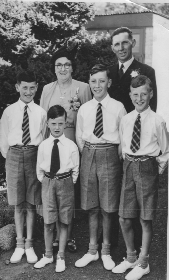