There are some residents of Abernethy who have given long and sustained service to the Village.   This series is going to highlight some of their memories and achievements, beginning with the President of the Village Crier, 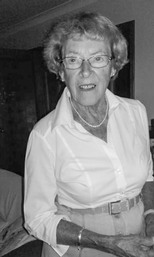 Hilda came to Abernethy in 1968 as the bride of Bobby Clow . His family had lived in Struan House for generations. It began as a cottage in the late 18th century and was enlarged as the family grew in prosperity to become the substantial  family house we see today.

Everybody knew who Hilda was but it was a long time before she puzzled out the relationships and links in a village of about 800 people who all knew each other.

Bobby owned the Tower Works and manufactured ladies nightwear under the ‘Fair Maid’ and ‘Aber Maid’ labels until 1988. Clow Square is where the factory once stood.  When the factory closed and  Hilda  was no longer involved with it she returned to her vocation as a physiotherapist in Dundee.

Abernethy had  many shops and a Bank and a Town Council which met in the Town House. This also held the Library, the Nurse’s Clinic and the Church had a room.

The whole village was involved in Gala Week. On Monday there was a concert, Wednesday a Car Treasure Hunt, Thursday was the Bowling Green Open Night and on Friday everyone was busy decorating floats and preparing their Fancy Dress for the Gala Parade. A Pipe Band led the many floats round the village to the Gala in the Powrie Park. The Saturday ended with the Gala Dance in the Williamson Hall where the Pictish Maid was chosen. She would be next year’s Gala Queen. Hilda introduced the Hill Race.

The Tennis Courts and Club House were derelict and the Town Council refused to help so Hilda and her friends held fund raising events and Barn Dances at Broadwell and raised £600 which renovated the Club House and Tennis Courts.

She started a Keep-Fit Class in the Primary School and still runs very popular Yoga classes.

The Town Council was disbanded in 1975 with regionalisation . Hilda was elected as a founder member of the Community Council and became Secretary. One early battle the new Council won was work to prevent the regular flooding round the Crees Inn and Station Road.

Hilda began the Flower Show in 1978. She was very involved with the WRVS. She was in charge of Meals on Wheels and was Emergency Services Organiser for Tayside. She was involved with fund-raising for the Museum which opened in 2000. She was president of the SWRI.

The biggest change she has seen in the village is the increase in population made possible when the sewage system was improved. The new houses have brought the real benefit of bringing new blood into what was becoming an ageing population.

Last but not least Hilda was a part of the group which began ‘The Village Crier’ eight years ago and still remains President even though she has moved to Bridge of Earn where she still enjoys her golf and a busy social life.