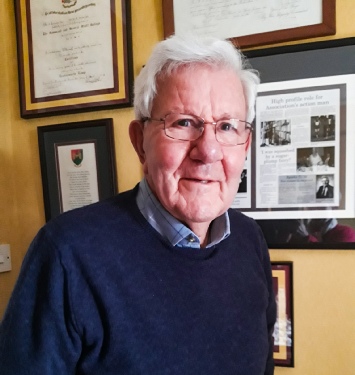 Colonel  Ian Cartwright CBE, has connections with the village going back to his parent’s time.

The Crees Inn became known as the Ponderosa for a while. You have to be a certain age to remember a TV series Western called Bonanza with a ranch called Ponderosa which was owned by the Cartwright family. Ian’s family (Cartwrights, of course) moved to the village in 1959 when his parents bought the Crees Inn. They ran it for four years and transformed it into a family friendly pub before selling to Alec Horne and moving to Pitversie Bank.

Ian was born in Manchester in 1933 but spent most of his boyhood in Auchterarder with his grandparents and attended Morrison’s Academy at Crieff. During W.W.2 his mother, Meg, was a nurse and worked with the Red Cross. His father, Harry, was injured in the Western Desert and then developed Multiple Sclerosis which forced his early retirement from the Air Ministry and led to the move to Abernethy. They then found family connections. Bob Smith, the Session Clerk, was a cousin of his mother Meg. Their mutual grandfather had farmed at Kintillo.

Ian enlisted on 1st November 1951 and on 31st July, 1953 was commissioned into the Lancashire Fusiliers, subsequently serving with the S.A.S. and the Fusiliers around the world. He was awarded the General Service Medal with bars for Malaya and South Arabia; the General Service Medal for Northern Ireland; the Consolidated Campaign Service Medal for over three years campaigning and was twice mentioned in dispatches. He was awarded the O.B.E. in 1974 and advanced to the C.B.E. in 1983.

He married Pat in November, 1958 in Malaya and they had four children. Daughter Jane was baptised in Germany but all three boys, Alistair, Bruce and Guy were baptised in St. Brides in Abernethy. Ian’s father Harry died in 1980. His mother found Pitversie Bank very lonely and she moved to 63 Main Street while Ian and Pat moved their family into Pitversie Bank.

The children were all educated at Morrison’s Academy, Crieff as boarders. They spent a lot of time with their grandparents in Abernethy and went abroad to visit their parents in the school holidays. Two of the most family friendly postings were Cyprus and Fort Levenworth, Kansas, USA. Ian had many unaccompanied overseas tours when the family stayed in Abernethy or London.

When Ian left the army in 1983 he worked in insurance in London. For ten years he commuted, leaving the house at 4am on Monday mornings. Within days of his second retirement Janet Paton had recruited him as Treasurer of the Horticultural Society and he began his third career of service to the village. He went to the Williamson Hall Committee AGM and left as Chairman for the next eight years. He started organising a Burns Supper with Ian Bett which led to the formation of the Burns Club. He was Chairman of Ancaster BLESMA Home for limbless ex-servicemen in Crieff. He became a Kirk Elder at St. Brides and greatly values the worship and fellowship of the church. Pat died in 2010 and is buried in Abernethy Cemetery.

Ian remembers Abernethy in the 50s and 60s as a self-contained village and a close knit community involved with agriculture and salmon netting. The new housing has been discretely absorbed into the village but he is most aware of the huge increase in road traffic through the village.

Although not born in Abernethy, Ian has regarded it as home since his parents moved here and Pat was always heavily involved in village life. Pitversie Bank was the first house that Pat and Ian bought together and has always been home to the Cartwright family.