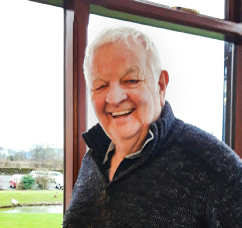 I got an idea of what it means to be a farmer when I was chatting to Ian Miller at Jamesfield. Twice we were interrupted; once to be told a sheep was out then to be told a goose was loose. The sheep had already been put back and the goose would return when it was ready!

Ian’s family bought Jamesfield Farm in 1941. His father, George, was born above the present doctor’s surgery and was the youngest of four. His mother, Elizabeth, was of mining stock from Lochgelly. George and his brother Alec formed A & G Miller, a fruit growing partnership. Alec had been badly affected by the Great War. His friend, Harry, with whom he had enlisted, was killed on their first day of action by shrapnel in his head and Alec was a P.O.W.

Ian was born in 1945. He was educated in Abernethy and Bridge of Earn before spending a year at Law School of Agriculture between Crieff and Comrie. Discipline was very strict but there was a thorough grounding in all aspects of farming. Ian had an accordion and remembers using it as a hiding place for a friend’s cigarettes. The Housemaster, Mr Baird, nicknamed ‘The Monk’, took the room apart looking for the contraband but in vain. Forty years later he was in contact with Mr Monk and was able to tell him where the cigarettes were hidden. The Grieve, Harry Strachan, told how he left home at 13 to live in the farming bothy for £13 a year. His mother had sent him away with ten shillings and when he returned he repaid her and still had his £13 wages. Jimmy Napier built first class stacks.

Ian started working at Jamesfield Farm in 1961. He felt there was no money in cattle and thought about intensive farming but his father’s mantra was, ‘Every farmer’s ambition in life is to hand a more fertile farm to the next generation.’

He married his wife, Pat, in 1966 in the now demolished Cargill Church near Guildtown and they had three children; Lynn, a doctor in Fife, Gordon, serving in the Police in Tayside and Garry who is a Social Worker in Tayside

The farm had pigs for 30 years and supplied many local butchers but the market died as supermarkets began to dominate food retailing.

Ian was becoming increasingly concerned about the use of chemicals in agriculture and in 1985 the farm became organic which was quite revolutionary then. He says he was inspired by previous generations of farmers who allegedly grew neeps so big that the sheep could gnaw holes in them big enough for shelter in the winter!

The farm became a research centre, sponsored by the EEC and Safeways. In 1986 he was very successful at growing organic potatoes but less successful at marketing them. In 1987 organic meat was launched at the Capital hotel in Edinburgh and by 1989 Ian was promoting it all over the UK, including Hyde Park in London.

Irene, his partner, helps run Jamesfield Centre which was opened in 2005 and hosts a growing number of small businesses as well as the restaurant, where it is a real treat to relax and enjoy the good food and lovely views.

The main change Ian has seen in Abernethy is the movement of people. When he was at school families had been there for generations. He is still astonished that Perth Auction Mart no longer exists.

He has travelled all over the world but, as far as he is concerned,