My contempories were my cousins at Ballomill and ,of course, a wide array of Davidsons, Kemps, Morrisons, Macdougalls,(mother a Powrie), Doigs and Scotts;  Peddie with a Syme connection and Haggarts. Very many more , of course, and Johnstons;  but I am only recollecting Abernethy Primary School. The Muirhead family had a chip shop at the bottom of what is now Hall Park. Another chip shop started up at the back of the corner shop, also a small tea room next to Poplars run by Mrs Thomson, a newcomer from Fife.

The cycle shop and garage were Wilkie’s ( same as John W). His father was a postie as well as being in the Engineers in W.W.1.

The football team was Abernethy Rovers who played in Low Park until Powries created the Ella Powrie Park in memory of Ella Powrie who died in childbirth. The Jarvis sons (builders) were gifted players.

The Tennis Club had one grass court next to the manse. The adults were very forgiving. Very attractive girls came for the summer holidays. They were the Shepherd family from Forfar. Their home was the White House. Norah was a stunner in my eyes but they were all great fun.

We played in the street. I envied Bert Craig for having boots with nails to get the most sparks.

The burns and dens were a constant magnet. Castle Law was a great adventure. Much ground adhered to Ballomill. Douglas Smith and myself were very keen on guddling for the bigger trout and Auntie Annie Smith would give us a biscuit tin and some oil to have a fry on a fire in the wood. Sometimes Charlie Davidson joined our secret goings on in the wood just at Ballomill Drive. Anyway I was taken from all this routine by being sent to Strathallan School.

I became and remained stranded in the Textile World but became innovative as the market developed.

I have no merit in me above average. My father John Clow was a seriously important  person.Got up the business, had an arduous wartime as Provost and really created everything connected with Robert Clow Ltd. Manufacturers.

The Grehan family came to the Mains of Cordon as a team for the general tasks, one of which was walking the cattle home from Perth market. Young Ken (Ken snr) competed in bike races and the barn was an attraction because of the lamp light atmosphere combined with the smell of embrocation rub. He was our local hero at Newburgh games held at Mugdrum. The coble race was a Newburgh - Errol affair, the fairground was also in town in the park by the school.

My sisters Elma and Carine are no longer,but that is how we were in the 20’s and 30’s.

I remain an Abernethy boy – Born 1/9/18 in Struan House, Station Road and live there with Hilda. 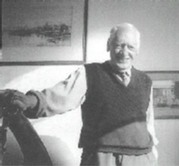 A BOYHOOD IN ABERNETHY IN THE 1920S