The Beaver Colony and Cub Pack in Abernethy have continued to grow over the last few years. When boys and girls reached Scout age some went on to join the Bridge of Earn Troop but more appeared to be leaving Scouting at this stage. As a result there was an obvious need to start a Scout Troop in Abernethy. So I'm pleased to say that on Thursday 20th April, 66th Perthshire Abernethy started a new Scout Troop which was officially opened by Robin MacDonald. 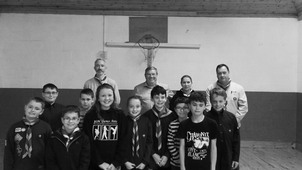 Kevin Imrie General Manager of Branston Ltd, Abernethy attended at Powrie Park Abernethy on May 4th. During this time he kindly presented the Scouts with a cheque for £1000. Kevin stated that "Branston were always keen to support local groups and delighted to be able to support the beginning of a new Abernethy Scout Troop".

Gordon Miller Scout Leader was delighted with this generous donation and said, “As we are just starting out having such a generous donation makes a huge difference to what the Scouts can do in the near future, I can't thank Kevin and Branston Ltd enough for their support”. 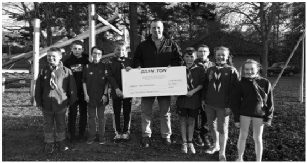