All three sections within the Scouting group are operating very well with the Cub Pack and Scout Troop at capacity and the Beavers increasing in numbers all the time. It is refreshing for the leaders to be able to provide back-to-back terms without the almost usual stop/start caused by Covid rates disrupting plans or even forcing complete lock-downs. The Scouting group are still very much enjoying being an outdoor group with the weather being favourable so far (end of October at the time of writing). A big thank you to all the leaders who continue to give up their own time to run their respective sections, allowing the kids to have much needed fun and adventures in what’s been a very challenging 18 months for everyone.

The Beavers are led by Nicola Coulter and assisted by Chris Framer. Beavers were recently competing in their teamwork challenge over the previous term, with all tasks being team related as well as educational. A quiz was developed by Chris where there were over a hundred laminated 1” x 1” flags placed upside down on a table. The object being that each beaver would then select a flag by turning it over, race to the next station and identify the flags country by comparing them on a large coloured poster, then head to the next station and find which continent the country belongs too, before dropping it in the tin labelled with the appropriate continent and repeat. I have to say I was really impressed by their knowledge and enthusiasm with very few mistakes. 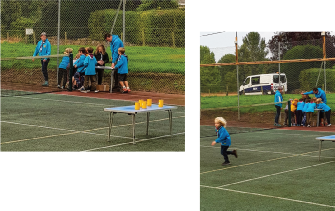 The Scout Pack is led by Stephen Trotter assisted by Jude Trotter, Ian Craig and Dave Cheer.The Scouts took the opportunity to get back to basics and managed to squeeze in a Friday night camp under canvas at Wester Greenside Farm (thanks to Craig and Caroline Haxton for letting them camp). The weather on the preceding days was awful with torrential rain but luckily it stayed fairish for most of the evening that the Scout Troop were away, and the weather didn’t put off any of the Scouts or leaders attending and enjoying the

Although the actual centenary date is September 2023, again in keeping with scouting “Be Prepared”, we are looking to contact and trace, over the next 12 months, anyone who was involved in the scouts. Again, can I ask anyone who was an Abernethy Scout, especially if they’re over the age of 60 to get in contact with myself, so we can arrange for scouts to contact you to record your memories and stories of scouting in Abernethy. As well as recording the information, we are hoping to display various aspects of scouting through the years in Abernethy during our centenary year with the help of Abernethy Museum.

I personally missed the construction of the Pavilion as I was at Agricultural College in South Wales between 1988 –1990 (studying how to be an alcoholic amongst other things) and I also worked and lived in Italy during my industrial year and wasn’t home very often. When I left there was an old wooden changing hut near where the pavilion is now and when I returned, we had a fully functioning Pavilion which is still the envy of numerous Scout Groups.

Since the last Crier I was recently made aware of the huge contribution that Allan and Ogilvy Webster had made towards the building of the Pavilion. The Websters’ Building Yard used to be just after the railway bridge off Cordon Farm Road where there’s now a dwelling house. The Websters, as well as working as volunteers on the site, would order and take delivery of building materials, and even constructed a gate in their then perimeter fence allowing access to the pavilion with materials.  So apologies for not mentioning them before, but we look forward to welcoming them to be part of our Pavilion Celebrations in the spring of 2023. The Scouts will be researching the pavilion construction during 2022 and will be looking to interview those involved so we can accurately record all their contributions.

I’m very pleased to say that the Scout Committee has again been successful in our application to the Community Investment Fund and will be looking to continue with the ongoing upgrading of the pavilion by replacing windows with double glazed units and upgrading fire exits, amongst other planned works.

Finally, a big thank you to Jill Young who has recently stood down as our treasurer. Jill has overseen not only the group’s accounts being moved to electronic banking but also maintained the group’s registration with Gift Aid and the implementation of the Online Scout Manager (OSM) system which manages personal records, attendance records, programs and online payments for activities and camps. This undoubtedly allows leaders to operate easier and safer, so a huge thank you to Jill for all her efforts over the past five years. We did tell her that it was a Ten-Year tenure, but she wasn’t having it. I often think the national treasury could take a leaf out of Jill’s book as she runs a tight ship and very much “Nae Receipt,  Nae payment policy”.

Although Covid has changed a lot of things it was refreshing to see some things don’t change, and St Johnstone once again putting Dundee United to the sword at Tannadice at the end of October. Thought I should mention the score as I know our chairperson Brian (the Sainte) Stewart would be very disappointed otherwise. (It was Dundee United 0 Saint Johnstone 1)!

Have a great Christmas and a Happy and Healthy New Year