It was away back in March 17th 2020 that face to face Scouting in the United Kingdom was suspended until further notice, with the Beavers, Cubs and Scouts coming to an immediate halt and worse was to follow with summer camps and activities cancelled a couple of months later, much to the disappointment of the more than sixty children involved in the Abernethy Scouting Group.

Abernethy did get the go ahead to start outdoor Scouting in August but with restrictions on the numbers able to attend. We felt as a group that we wanted to be able to welcome everyone back at the same time and didn’t want to be in a position of having alternate weeks for the kids involved. We knew we needed to get something in place with the pavilion to make it more Covid compliant in order to be in a position to offer the Scouting Sections a continuous program indoors and outdoors, so our attention turned to the building in August. After completing the risk assessment for the Scouting Group and the Pavilion, which I would imagine is a similar task to solving the Brexit trade deal negotiations, it was clear which areas were in need of improvement to allow our return.

The Scout Committee already had planned building improvements for 2020, but due to the Covid crisis we had to make alternative plans to put in new hand washing provisions, new hot water systems, hand dryers and additional outdoor lighting and protective parking bollards to enable the Beavers and Cubs to walk safely from the car park to the pavilion. This required work meant that we had considerable plumbing and electrical work to be carried out with the work scheduled to be completed for August /September. Unfortunately, the tradesman scheduled to carry out the plumbing work was unable to do so within the agreed timescale, leaving us with a bit of a headache. So we were delighted when Ally Mallinson kindly stepped in and carried out the required plumbing work so we could get things back on track with the electrician due to start in Mid-October so we could make our scheduled return targeted for Tuesday 27th October. 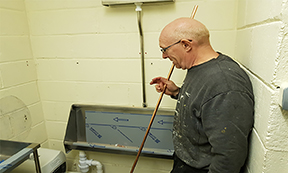 Ally Mallinson hard at work with the bathroom alterations with wash troughs and hot water systems being installed. Thinkin 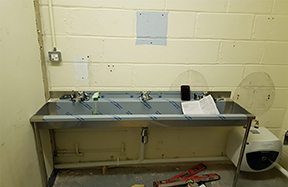 g everything was in hand we were informed at the last minute that the electrician was now unavailable for several weeks and was unable to provide a firm commitment. Faced with the prospect of having to further delay the start of the Scout group, we started searching for alternative electricians and approached Mark Haddow of L.W. Haddow Plumbing, Heating and Electrical and informed him of the Scout Groups predicament. 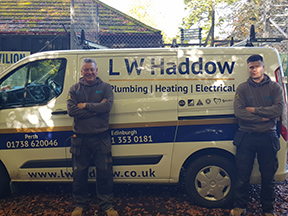 By this time the Beavers, Cubs and Scouts were aware of the scheduled return date and I know that they would have been bitterly disappointed if the return was to be cancelled. Mark listened to our plight and kindly rescheduled work so that he could free up an electrician in order for the work to be carried out for us to return as planned.  Pictured above Electricians from LW Haddow. Mark Haddow stated that L W Haddow were delighted to have helped and to have been involved in all aspects of completing the electrical work for the Abernethy Scout Group. We would like to wish them every success going forward in the future.

So, after seven months we were back with Beavers and Cubs on Tuesday 27th and Scouts returning later that week on Thursday 29th October.

The Leaders have worked hard to offer an outdoor programme but with the provision that we can hold Scouting indoors on the evenings with the worst weather. However, that said, the night the Beavers and Cubs returned it was torrential rain with the kids having an absolute ball outdoors, so here’s hoping that we can continue uninterrupted by the ongoing Covid crisis. The Beavers are pictured below on their return on Tuesday 27th Oct in the now illuminated tennis courts allowing us to have an outdoor dryish area. 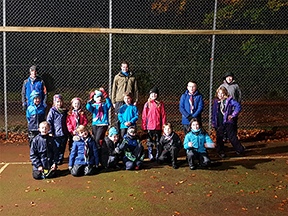 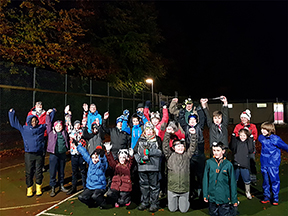 Pictured above front centre is Freddie Farmer who was the latest winner of the Gavin Robertson Memorial Trophy. This trophy is usually awarded every term, but this was the first opportunity to award the trophy in 2020. Freddie was awarded the trophy after his hard work in completing the virtual Cub Camp which the cubs took part in during the summer lockdown.

Throughout the time I have been involved with the Scout Group both Binn Group and Branston have supported us and once again when approached they were happy to assist in helping with the return of Scouting to Abernethy. Both John MacGregor and Kevin Imrie operate businesses either within or close by Abernethy. John has lived and run businesses beside Abernethy for over fifty years and Kevin Imrie has worked at Branston (previously known as West Cumberland Farmers) for thirty years working his way up to General Manager. The Scout Group wanted to recognise their continuous support, so both John and Kevin were delighted when we invited them along to the unveiling of our new sign at the pavilion. 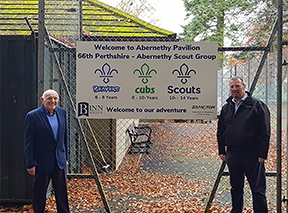 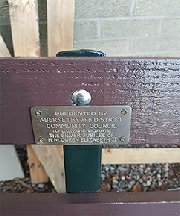 n the background of the above picture you can see a fully restored bench. The bench was previously in two or three pieces and ready for the skip but, thanks to the Community Pay Back Team, the bench was taken away and fully restored. As you can see it was donated for the Silver Jubilee in 1977 by the then Community Council so hopefully it will last another 40 years. 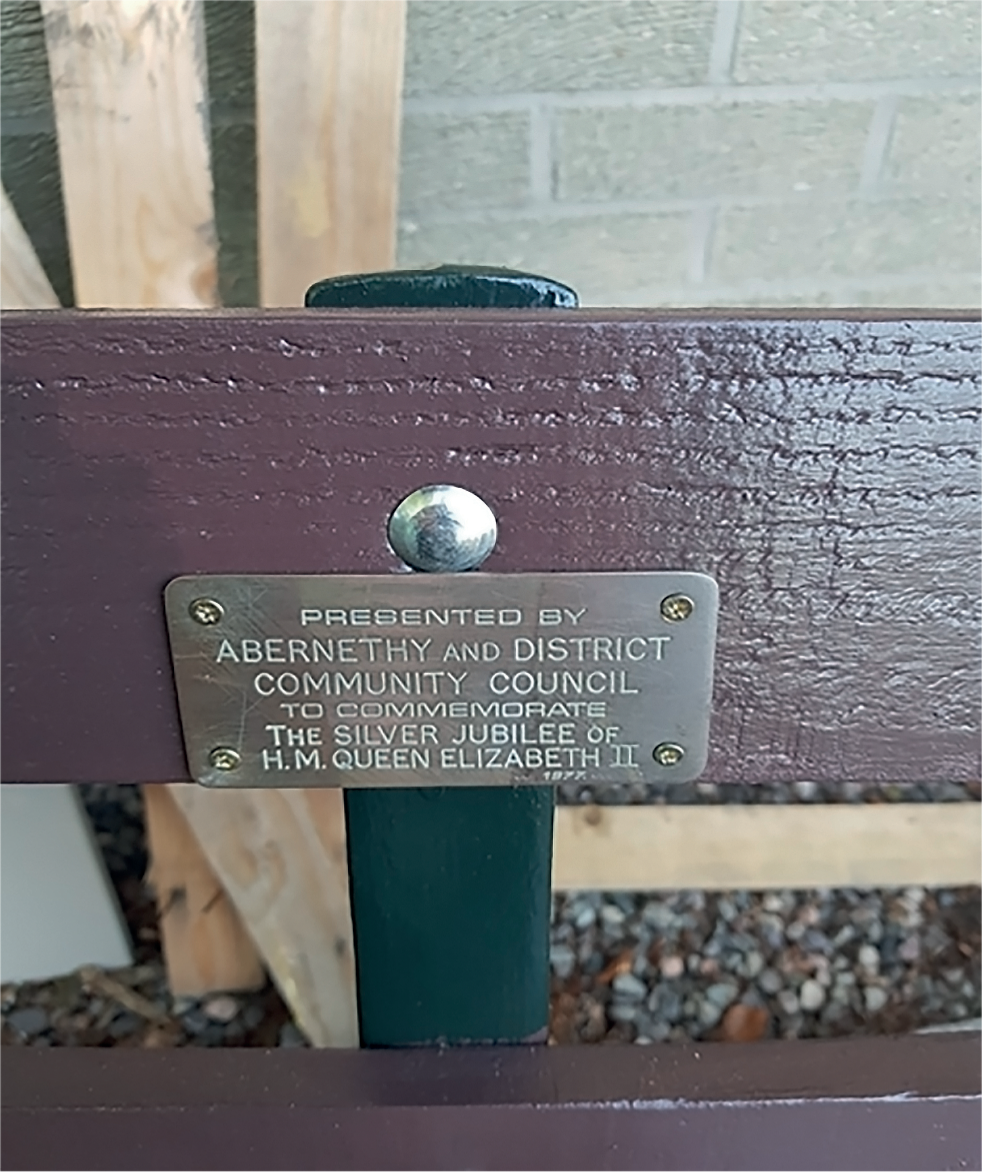 Finally thanks have to go to all the Leaders and the Scout Committee who have worked very hard to assist in the returning of Abernethy Scout Group, so huge thanks to all their efforts as there would be no Group without them. A special mention must go to Brian “The Saint” Stewart whose knowledge in the building trade has again proved invaluable unlike his knowledge in fitba’ with him persisting to support the wee Tayside team fae Tannadice Street.