A recent walk up the Witches’ Road, part of the circular walk from the village to the Glenfoot Road, made me recall reading an account of the witches after which the road was named. This was from the book “ Roman Antiquities of Fife “ written in 1829 by the Rev. Andrew Small from Gateside whose forebearers came from Abernethy. I am indebted to Bill Drever who used to live at Drumlea on the Perth Road, for bringing the story of the Abernethy witches to my attention. The period referred to was during the 18th century when it was common for witches to practice their beliefs and to suffer the fate of being burnt to death if found out. Indeed the last witch to be burned in Scotland was in Dornoch in 1722, while nearer home at Dunning, a cross marks the spot where a witch was burned in 1657.The Rev Small tells that the accuracy of the story of the Abernethy witches comes from the fact that the story came down from his Great Grandfather, who had been told it by his Great Grandfather. This must have been an important book in its day, as no less than King Geordie 1V himself ordered four copies, and a list of subscribers indicate it was taken up by many of the most important scholars of the time throughout the country.

At this time a Mr Ross resided at Innernethy, which as the name suggests was below the village near the where the Nethy burn reaches the river Earn now on Balgonie farm. As a young lad I remember there were ruins next to the burn that we referred to as Innernethy Castle, with an old orchard around it where we used to go and pick the beautiful pears. The ruins were removed to restore the land for agricultural use which was much frowned upon at the time. Mr Ross was told by one of his cottars that witches met regularly on the south side of the Castle Law hill and that there was a red book in which the names of the witches were recorded. Mr Ross was keen to get his hands on this book so that the witches could be identified and brought to summary justice i.e. burnt to death. By way of obtaining this information Mr Ross, dressed as a woman, attempted to join their coven and the tale evolved as follows.

“Accordingly, the meeting is said to have taken place on the Castle Law. In one of those hollows in that hill where the golden cradle is said to be hid; and a more sequestered spot could scarcely have been fixed on, as two of these are completely concealed from every other object, though on the top of a pretty high hill. The day and hour were also fixed ,and the meeting was said to have been held on a Sabbath day, in broad daylight, in order the better to favour his project, when the red register book was to be ready for him to enter his name in, and with his own blood too.

Mr Ross had an excellent well tried mare on which he could depend and is said to have been himself such a superior and steady horseman as to be able to ride down a hill with a sixpence lying loose on his foot without allowing it to fall off.

Having everything well pre–concerted for the meeting, the last thing he did was to warn the miller of Ballo Mill, a little up and west from the town, to be sure to have his mill going, not surely to grind corn on the Sabbath day, but only that it might make a noise, as witches were said never to come within the clap of a mill. So it seems he fully expected a hot chase, and meant this to be the first relief or breathing space from it. Accordingly, when he came to the meeting, agreeably to appointment, he was allowed to sit on horseback, by way of deference, and the red book given to him to subscribe; but, instead of doing this, he immediately secured the book, put spurs to his mare, and galloped down the hill, the easiest way no doubt, which would be to the south where the ground rises high at the back; and he would soon come upon Drumcairn ground, and then along the back of the hill till he reached the road. 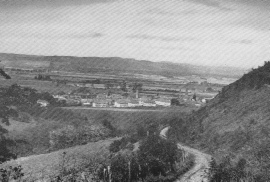 The witches are reported to have swarmed about him and clung to him and his mare both by the tail and mane, in the same manner as those from Alloway Kirk as represented by Burns are reported to have clung about Tam O` Shanter`s Maggie. The laird still kept his seat, and the mare her tail, till he reached the mil, which was more than a mile and a quarter distant; and there as he anticipated, there was a cessation from hostilities for a little. Whether this was from the clap of the mill, the crossing of the running stream about two hundred yards down from the mill, or the passing of the end of the town, is uncertain. He is said to have got a good way ahead of them; but there seem to have been supple long legged Nannies among them; for, not withstanding of this, they soon overtook him, and were on him again long before he reached Innernethy, which was another mile farther. But the Laird of Innernethy`s mare seems to have been of still better stuff than Tam O` Shanter`s Maggie; for the one only saved her master at the expense of her “ ain grey tail “ after running only about two hundred yards; but the other not only saved her master and also kept her tail, (for I have never heard of it being pulled away) but likewise carried off the prize so nobly contended for in a chase of two and a half miles. As soon as he got into the court, he gave the mare to his man, and got into the house, locking the door behind him. He then went upstairs and copied their names as fast as he could possibly do; for he knew he would not get leave to keep it long from such clamorous and troublesome visitors, as they threatened to come in at the lumhead upon him, if he did not give it back. Whether he took down all of the names contained in it, or only a few, is not mentioned; but as soon as he got what he thought sufficient, he drew up the window and threw it out to them, and thus got quit of his noisy visitors.“

The route taken by Mr Ross to escape his pursuers was, I reckon down what we now refer to as the Rough Glen, as it then passed the Ballo Mill. The sight of the mill was probably just upstream from the bridge into what is now the property of Mr and Mrs Glennie, still I think called Ballo Mill. There was a mill in operation on this sight well into the 19th century and it was powered by water from the large dam further upstream which is still there. Water from the dam was carried by a lade that was on the east side of the burn half way up the banking and its passage can still be identified today. Around 1914/15 after a huge storm, the dam burst at its eastern end and hundreds of tons of stones and gravel were washed downstream ending up on the field on the west side of the burn down Hatton Road. My uncle born 1901 told me one of his first jobs working for his father was for weeks on end, carting off all these stones and gravel by horse and cart to restore the land for agricultural use. It’s fortunate that the two bungalows on the left side of Hatton Road were not built at this time or they might well have been washed away.

There then is the origin of why the Witches’ Road is so named and the terrible fate that the witches suffered by failing to catch Mr Ross as he made his epic ride to escape them. My picture shows the road probably taken in the 1940s and shows it as I remember it, much wider and used by horse and cart to reach the fields below the road. The road from the village leading uphill from the Williamson Hall was referred to by my late aunt as “The Coo Road “. This was the road taken by villagers years ago if they owned a cow and would have taken it to graze on Abernethy common. This was an area of land to the east of the old quarry now on Gattoway farm.

In the book the Rev Small says he had identified the spot on the Castle Law where the remains of twenty two witches identified from the Red Book were eventually interred after burning. I think I also know where it is but I`m no telling onybody !