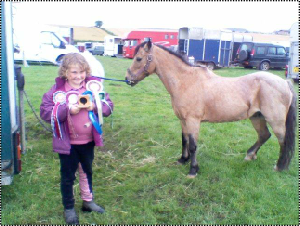 Mac covered himself in glory when he went with Imogen to the Scottish Endurance Championships at Kelso in August.

The going started as very muddy and difficult but Mac took care of his 9 year old rider and completed three rides on three days, totalling 70km which earned him a special medal.

This season he has carried Imogen over 160km (100 miles) of varied terrain so now he has his shoes off and is having a rest. 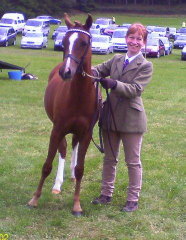 On Sunday, August 11th Flora had the big adventure of going to Kinross Show. She was shampooed,  she had her mane plaited and white powder to enhance her white socks. Mac  went with her in the trailer for company but Flora had to parade round the ring without him.

It was an amazing experience for a youngster with Pipe Bands, heavy traffic and lots of animals and people. The Fancy Dress was most exciting. Even the people were surprised by horses dressed as Liquorice Allsorts, one of whom was ridden by Bertie Basset so you can imagine how excited Flora was.

In spite of this, she won both her classes, gaining two rosettes and a trophy, and was very glad to get home to her Mum and her field.