There comes a time in every foal’s life when they have to learn to manage without their mothers. Flora was born in June, 2011 and has spent the win- ter living with her dam, Bella, and her other pony friends; Imogen’s pony, Mac and Charlie the little cheeky Shetland. Flora was getting chubbier and chubbier with feeding from her mother and poor Bella was getting skinnier and skinnier. The only way to stop Flora feeding from her mother was to wean her. She would have to be separated from her mother for eight weeks to give the milk time to dry up and break Flora of the habit of feeding. It would be hard for Flora and we wanted to make it as easy as possible. This is the plan we came up with.

We borrowed a lovely grey mare from Over Dalkeith Stables. Hollie is a Connemara in her twenties and last May she broke her leg. Usually a broken leg is a death sentence for a horse but Hollie is so loved that Katie, her owner, and the vet fought to save her. It was touch and go as she spent months standing in a loose box with a big plaster cast on her leg but she has come through well and will soon be ridden again. She came to Abernethy to be a foster mother for Flora. 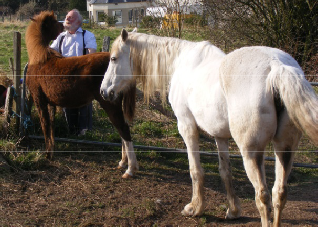 We took Bella and Mac out of the field and put Hollie in. At first Flora tried to get a drink from her but there was no milk. Then she shouted for her Mum but quickly settled down with her new Mum. She still had her pal, Charlie and we were very relieved that she settled so quickly.

We now worried about Bella missing her baby but she seemed glad of a break from the responsibility. We took her to Tentsmuir Beach along with Mac and they had an exciting ride along the sands. Splashing in the sea helped distract her and cooled her underneath where she would be tender until the milk dried up. All has gone really well and by the time you read this the ponies should all be together again and Hollie will have been welcomed back to her home Over Dalkeith.