Charlie, the little tiny Shetland pony, lived in the pony field on Station Road with Bella, Flora and Mac.

Bella was the Queen of the field. She was an Endurance Horse who had won the Dukeries Hundred-Miles-in-a–Day Race in England and had been Scottish Endurance Champion. Mac was a little brown pony who had done a season’s Endurance Rides with Imogen and won her a medal at the Scottish Championships in Kelso in 2012. Flora is Bella’s daughter. She liked to play with Charlie and sometimes Mac would nibble the itchy place on his neck but Charlie never felt that he was special. If Bella or Mac were in a bad mood they would bully him a bit and Bella would sometimes stop him playing with Flora. Imogen wanted a bigger, faster competition pony so Fennela came to live in the field. This meant there was no room for Charlie so he went to Rumbling Bridge to live with a little herd of Shetland ponies. They made him very welcome so he was not lonely but he still was not special to any pony.

Meanwhile, in Scotland, in a scruffy, cluttered paddock, lived a lonely little jenny donkey with no name. She played with a blue plastic oil-drum because she had no friends to play with. One day a kind lady saw this little sad donkey and felt so sorry that she bought her. She brought the little donkey to a grassy paddock at Abernethy and called her Jessie, after the cowirl in Toy Story. Her friends said that Charlie might be a good companion and they brought him to the field in their trailer. As soon as Jessie saw him she was thrilled. She did all her tricks with her oil-drum and then she lay on her back and waved her legs in the air. She raced over to Charlie and he kicked his little furry back legs out to tell her she must treat him with respect. Charlie pretended he was interested in eating grass but he watched her carefully and gradually moved closer and closer to her. He thought she was lovely and was happy to be her friend.

One day Bella and Fennela went past the field. He ignored them because he was with Jessie and was talking to his new owners. Bella was impressed because she is frightened of donkeys and there was Charlie being so cool. Jessie has big donkey ears and a soft smooth coat and Charlie has tiny fluffy ears and a very hairy coat but they both think the other is beautiful and are so happy to have each other and be very well looked after. 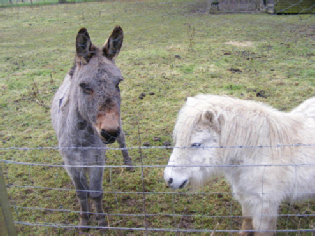