BETWEEN A HORSE’S EARS

All horse riders think that the best view is that seen between a horse’s ears.

On Sunday 2nd September 44 riders came from all over Scotland to see Abernethy from horseback. They were members of the Scottish Endurance Riding Club

(SERC) and had come from the Highlands, the Borders, the Lothians and Tayside to the Endurance Ride organised by Anne Scott and Kirstie Graham.

Kevin Imrie at Branston gave the use of Branston’s land for a venue for all the trailers to park and space for horses to be vetted at the start and finish of the ride.

The route went on tracks through land belonging to Scott Baird, Andrew Herd, the Forestry Commission and Jack Lawrie and past Ian Gerrard’s driveway. A big thank you is due to them. 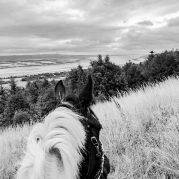 The 25km riders found the route very demanding as they climbed steadily up through the Baird’s Gattaway and continued climbing through Andrew Herd’s Turflundie and into Pitmedden Forest. Here the ground became less steep and more undulating and they enjoyed inviting loops in the forest round Clamieduff Hill and New Hill and out onto the main forest track at the big tree marking the site of the old bothy. They turned and went back and passed the historic Thirlstane to be rewarded with the stunning views over Fife as they rode the track past Gerrard’s Stewarthill  entrance and up onto the loop round the pylons to be dazzled by the breathtaking views along the Tay to Dundee. Then they rode down Stewarthill Drive and along the Abernethy walk to the gate to more Baird fields. 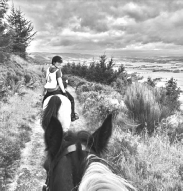 Now began the steep descent with the spectacular panorama of the Earn Valley spread before them as they rejoined the outward route at the Linns and returned to Branston’s yard.
The 30km riders enjoyed all this but began by riding on the flatter land at the other side of the railway past Balgonie and Jamesfield before crossing the main road and going along the track that crosses Jack Lawrie’s land at Wester Clunie and goes past Ninewells Farm and Macduff’s Cross. This brought them into the forest  behind Lochmill Loch and they went out towards Auchtermuchty and the Clink.

To claim miles for a ride, which count towards awards, the minimum speed for the 25km is 8km per hour. Some riders could not manage this because of the steep terrain but they still enjoyed the ride anyway.

Colin Sykes from Border Branch averaged a speed of 13.33km on his ex-racehorse Redbridge Radar so clearly the hills did not worry him!

The fastest 30km rider was Kaye Conafray from Lothians Branch on her Arab with a speed of 10.88km per hour.
. 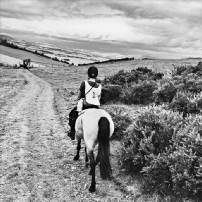 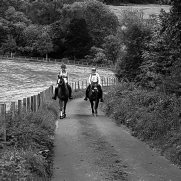 Endurance Riding as a sport starts with rides of about 20km (Pleasure Rides) and goes up to 160 km or 100 miles in one day. All horses are vetted at the start and the finish of the ride with the veterinary inspection becoming more stringent and frequent as the distances increase. It is not orienteering so riders have a map and ‘talk-round’ and the course is marked to help them.