You may recall that in the last issue you read of my representing WRVS Scotland at the Ceremony of Remembrance at the Cenotaph in London so I thought I would continue on the theme of WRVS and in particular in Abernethy.

Sadly WRVS no longer exists and has evolved into RVS which I feel is not quite correct as it is no longer the organisation which was granted the Royal Charter. To explain my reasoning I must give you a very brief history of WRVS.

The organisation was formed on 16th May 1938 by Lady Reading as the country prepared for war. The Women's Voluntary Services was created to help local authorities in preparation for looking after civilians in the event of war. One million women volunteered and undertook countless jobs at the request of Government Departments and Local Authorities, caring for people suffering as a result of war, evacuees, refugees, homeless people and others needing clothing, temporary accommodation or general comfort and care and also running canteens for the troops.

The Royal Charter was granted in 1966.

So much for this briefest of brief histories as we jump from 1938 to the early 1970s in Abernethy.

As with so many members around that time my introduction to WRVS was through Meals on Wheels when I was asked by the Meals on Wheels organiser in Perth if I would organise a team to deliver meals to the elderly and housebound within the parish and so began WRVS in Abernethy.

Meals were delivered 3 times a week to around twenty recipients, either soup and a main course or a main course and pudding. The meals were collected in insulated containers from different venues throughout the years, Bridge of Earn Hospital, P.R.I., Dunbarney School, and Abernethy School. Our area included Abernethy, Aberargie, Dron and the Baiglie end of Glenfarg. No matter the weather the meals were delivered. The Abernethy team was fantastic and I know we all enjoyed doing our round and recipients were always glad to see us. Many a tale could be told of our experiences in those happy days. The delivery of meals ended in 2009.

One thing led to another and we became involved in other areas of the service. An Afternoon Club was formed and met in the Masons' Hall where people would come along for a cup of tea, a game of cards or dominoes or just a friendly chat. This of course involved volunteers to make the tea and provide transport if and when required.

In those days WRVS owned two caravans, one in Anstruther and one in Blair Atholl, available to retired and elderly people for a holiday. I remember taking several people from the area to these caravans and bringing them home again always full of stories of the great holiday they had had.

I became very involved with the Emergency Services of WRVS. This was the only area where a training was involved so, after undergoing the initial training myself, I got a team organised in Abernethy. The reason for training was that we could be called out to an emergency anywhere in the country, be it fire, flood or any type of major incident. We had to be able to set up a rest centre to provide food, clothing and shelter to people rendered homeless.

How does one provide food and drink to firefighters, fighting a moorland fire in highland Perthshire? No electricity, no gas, nothing! WRVS could do it. There were store rooms throughout the country where emergency equipment was kept, boilers, kindling, bags of sticks, firelighters and bricks to build field cookers.

To keep teams up to scratch exercises were run using the above mentioned equipment and we were asked by various bodies to provide food and drinks at their fund- raising events, e.g .Riding for the Disabled in Glenfarg (attended by Princess Anne on one occasion), Upper Springlands in Perth, several events at Scone Palace and Glamis and in particular Abernethy Gala Day.

This was always great fun from beginning to end. We made gallons of tea and the WRI (as it was called then) served this up along with all the home baking generously provided by the bakers and cooks in the village. 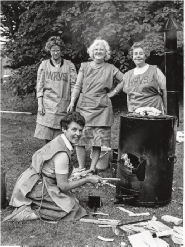 he team gathered together in the morning to assemble the equipment, taking into account the direction of the wind so as not to smoke out our neighbouring stall-holders, fill the boilers, ensure we had enough fuel to keep the boilers going all afternoon, light the boilers and then it was full steam ahead for the afternoon. 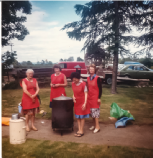 t the end of the day all the equipment had to be dismantled, cleaned and dried ready to be transported back into storage and our working area left in pristine condition. This could not quite be said of the team, having been stoking fires all afternoon we were somewhat smokey and sooty by the end of the day. It was a day we all enjoyed and I hope this article will bring back happy memories to all those who were involved with the WRVS in Abernethy Two essential qualities were required to become a volunteer;

2) A sense of humour

and certainly the Abernethy members had both 100%.