WHO IS IN YOUR GRAVEYARD?

I find graveyards very interesting places, a place for family research, a place for a history lesson and not a place to be afraid of. My granny told me “It’s the living you have to be afraid of and not the dead”, so give the one in the middle of our village, next to the church, a visit sometime and you are sure to find some interesting grave stones.

I hope this regular article will give you an insight into some of the very interesting people buried in the graveyard and a bit of history behind that person or those persons. I intend to leave a marker beside the gravestone in question so that you can check it out for yourself.

The Robertson Brothers and the Tay Bridge Disaster.

The Tay Bridge Disaster happened one very stormy night on the 28th December 1879 just after 7 o’clock killing all on board. The train was travelling from Burntisland to Dundee when the bridge collapsed throwing steam engine, carriages and all the passengers and crew into the freezing water of the river Tay.

Two of the passengers on that stormy night were the Robertson brothers from Abernethy, William aged 21 and Alexander aged 22. The brothers were single and lived with their father at Main Street, Abernethy, but at that time were living in digs at 100, Foundry Lane, Dundee. Both were employed as stokers in a gas works in the city.

It was a stormy night when the brothers boarded the train at Abernethy station, hoping to make the connection at Ladybank station with the ill fated train travelling from Burntisland. William was dressed in dark tweed suit, woollen shirt and striped blue and grey socks while Alexander with his dark hair, large whiskers and moustache wore a dark cloth overcoat, light tweed suit, Rob Roy tartan scarf and silver lever watch. We know all this information because as the bodies were recovered great care was taken to detail each individual.

Unfortunately, they did make the connection at Ladybank and the rest is history.

WHO IS IN YOUR GRAVEYARD? 2

If you went to check out the Robertson brothers’ grave I hope you found it, and I will use the same orange marker again this time.

The name Williamson will be familiar to many in the village, yes the Williamson Hall. But who was Williamson? The man in question was Andrew Williamson, one of the Williamsons who  farmed Mid and Easter Clunie and Skirlbear.

Andrew worked as a school teacher in Kirkcaldy and met his wife Margaret Scott there.

The Willaimsons were, as you say, well connected and owned much land and property in the area. They were kirk goers and were members of the U.P. Kirk, the one in Kirk Wynd presently owned by Mr and Mrs Smith, Kirkland Restoration.

Presumably Andrew came up with the idea of a public hall to be used for the betterment of the population of the village and surrounding area. Andrew donated £50 6s 5d,  to start a fund to raise the money needed to build the hall. Under the control of the U.P. Kirk, £5 was added annually from 1843 to 1880 until enough was in the coffers to enable the work to begin. The total cost of the hall was £420 17s, (£50,857. 68p in today’s money).

It was dedicated to him with the grand title of The Williamsonian Scientific Hall and Library, better known to us as the Willi Hall.

In the early days it had a library, and a further fund was set up to purchase books for it as well as the many functions held in the main hall.

The Williamson Hall is still a favourite venue for all sorts of functions, weddings, craft fairs, Burns suppers and many more. 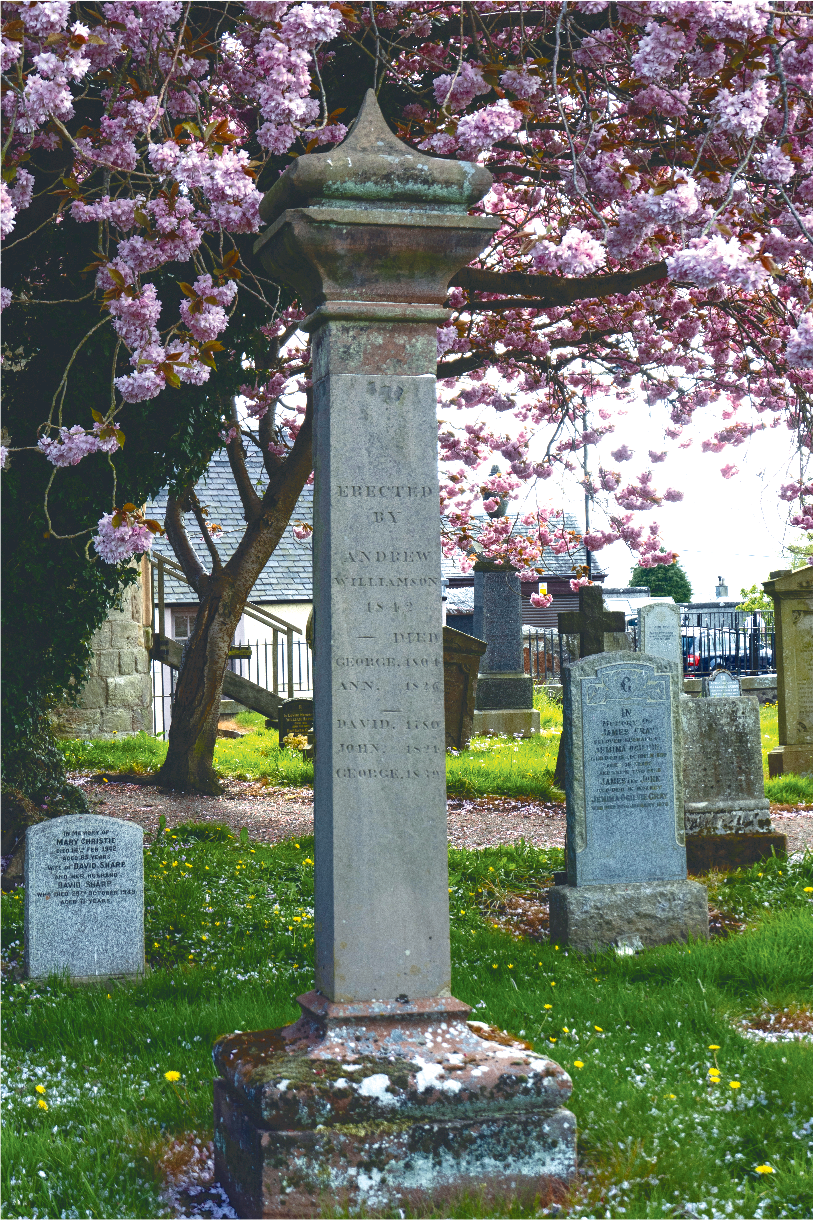 As you can see from the photo below the family grave stone is a tall majestic one and stands head and shoulders above the stones surrounding it. To find it easily enter the graveyard by the main gate, bear right, and look for the orange marker.