MY STORY – HOW I COPED IN LOCKDOWN

How did I cope in lockdown? Well, some days I coped better than others, but on the whole I coped fairly well. I think the fact we live in a beautiful part of Perthshire helped. Also, I have a great view from the back of my house, and that helped too. It might have been a different story if I lived in a big city in a house or flat with no garden.

Walking in this beautiful countryside of ours was my saving grace, whether it was just round the wee park out my back gate, or some of my longer adventures as time went on, and we were allowed to go a bit farther. And of course, the weather did help.

My garden too was a godsend, especially in the early days of lockdown when we weren’t allowed to go too far from home. During that time, I planned to do all sorts of jobs, like de-cluttering, decorating, painting the fence and shed, etc, etc. I also looked out an unfinished knitting project intending to finish that jumper that had been on the pins for about ten years. I even dragged the keyboard out, intending to watch videos and teach myself to play and hopefully be able to knock out a tune! Did any of that happen? No, I’m afraid not. The shed is half painted, the fence isn’t yet painted, decorating not done, de-cluttering not done, the jumper is still in the bag, and I still can’t play a tune! Instead we spent our time doing jigsaws and playing games that hadn’t seen the light of day for years, and sat in the garden when it was nice, and I did get a bit of gardening done. We also had lots of facetime calls with family in the early days, and we still have a weekly family quiz.

As I said, walking is my thing. I have done some calculations and it turns out I have done 30 walks (ranging from 2 miles to 8 miles) between 18th March and 2nd August, a total of 150 miles, and taken about 1,000 photographs! I have shared lots of my photos from walks on Facebook and several people have said how much they enjoyed seeing them. This definitely gave me a boost when I needed it most. Others have said I should compile a book of walks, so you never know, watch this space!

One good thing that has come out of lockdown is that I have learned to appreciate my own local area, and have realised how beautiful it is, and how many beautiful wild flowers we have. I have followed the changing seasons on the farms, from the fields being ploughed, the seeds being sown, the tatties being planted, and the “braw strecht dreels” that I am sure my late father would have remarked upon. Then the growing and cultivation of the grain crops, and the joy of seeing the tatties coming through and flowering.

The most enjoyable thing though, has been seeing all the wild flowers in their cycle, starting with the whins in March, along with the primroses and daffodils, followed by the broom in April and the trees just beginning to bud. The spring flowers in Nurse Peattie’s Memorial Garden were looking magnificent this year, and the wigelia and camelia were stunning, as were the primroses and tulips in the tubs around the village. The pansies in the tubs at the church were also greatly admired.

In April I was lucky enough to spot a wee deer on the witches’ road and he stood still long enough for me to get a picture! Also in April I climbed half way up Castle Law and along to Ayton Wood past the witches’ cave, for the first time in years and was amazed to see the trees that had been cut down in Ayton Wood and the beautiful views that one can now enjoy. It was truly amazing and I got quite emotional and even took a wee video! The sheep and lambs were now out in the fields and growing fast, and dandelions were now in full bloom.

May was apple blossom time and the broom was now starting to flower, along with the red campion and meadowsweet. The barley and wheat were growing well in the fields, and the whins were now at full flourish on the hill. The lambs were growing fast and the mayflower (hawthorn) starting to appear. By mid-May we had the comfrey, speedwell and dead nettles on the road verges. May also brought another climb up Castle Law and another visit to the witches’ cave, the oxeye daisies were now starting to make their appearance and the whins were still in full bloom and the leaves bursting forth on the trees with the hawthorn now in full bloom too. I think it was the best I’ve seen for a long time, or was it I just had more time to stand and stare? I didn’t see many bluebells though, only a few in the Den. Aquilegia and wigelia were now a joy in my own garden. By the end of May, the grain was growing well and the barley swaying in the wind at Cordon and Broadwell. Dandelions were now past and the dog roses starting to appear. They were also the best I have seen for a long time. On 31st May we had the lovely big moon during the day and I managed to capture a photo from Castle Law. I made it to the top this time and boy was it worth it! Emotions got the better of me again and I cried at the beauty all around me. I took another wee video! In the Rough Glen were yellow welsh poppies in abundance.

In June, oxeye daisies now in full bloom, and foxgloves and yellow welsh poppies in the Rough Glen along with hypericum and honeysuckle in abundance. Dog roses have really come into their own now, and clover, birds foot trefoil, cow parsley, and a wee orange flower called fox and cubs had now made an appearance along the roadsides. Oxeye daisies and dog roses lined the verges on the approach to the Screw Brig and were there for all to admire with creeping thistles appearing everywhere. Meadowsweet and feverfew were now lining Jamesfield Road. By the end of June the cow parsley was looking very pretty with their purple centres while barley and wheat ripened well in the fields.

Nurse Peattie’s garden was looking beautiful with poppies and lupins. In my own garden the peonies appeared in abundance as did the foxgloves and geraniums.

In July, the spear thistle or common thistle with its distinctive purple top had made an appearance, and rosebay willow herb was now appearing, giving a wonderful splash of colour. The roadside verges had now been cut and were all looking very neat. In July I was alerted by a friend to a bonny blue flower he had seen growing in a field of other wild flowers, which turned out to be chicory, the coffee root plant. This was my most exciting find! Crops are now all looking good and some ready for cutting, beans looking well, with lots of butterflies some Tortoiseshell and Speckled Wood butterflies. Also purple tansy (Phacelia) in a strip of wild flowers at Hatton, and flowers on the tatties. I ventured up Stewart’s hill in July and was rewarded by the views and wild flowers. harebells, lady’s bedstraw and tormentil growing together with some eyebright, a very pretty wee flower. Some summer colour now in Nurse Peattie’s garden; marigolds and petunias, and a lovely red crososmia, even berries on the variegated holly tree! Last day of July and fruit and berries in the Rough Glen;. plums, wild rasps, black currants, and red currants, also rosehips making an appearance and rowan berries. I decided to walk down Glenfoot Road and try out the new speed limit of 30mph. Glad to say everyone kept to the limit and were very courteous. Himalayan balsam was now evident on river banks, very pretty but very invasive. Angelica growing tall on the railway embankment, along with meadowsweet and lots of rosebay willow herb.

For my most recent walk I ventured into Fife and saw some scabious and what I think was viper’s bugloss. Who knows where I will end up next!

Some of Evelyn’s photos 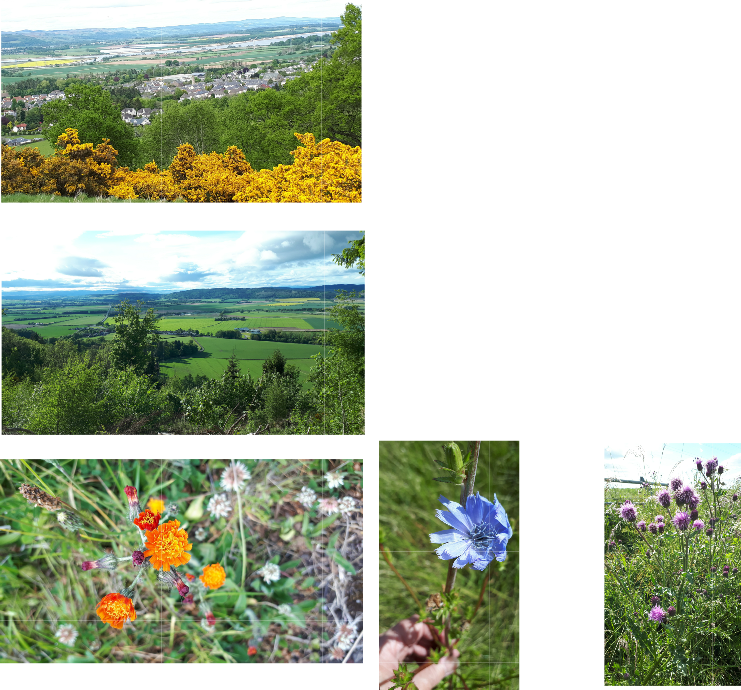