Little did I think, as a teenager playing in a tennis tournament at Kilgraston School, that I would ever have the good fortune to live in this area. Young as I was, I remember being impressed by the beautiful countryside and the peace and quiet. many years later we sent our daughters to be boarders at the school.

I consider myself a Glaswegian as most of my life has been spent in and around Glasgow.

In 1984 things changed as my husband got a job as sales manager at Frews Garage in Perth. We bought a house in Woodside near Burrelton, the girls became day pupils, and we all settled into a new life in the country. In the next few years I worked in Frasers, McEwens and finally became manager of Barnardos Charity Shop in George Street. I was there for 15 years until I retired in 2004.

I first heard of Abernethy from my daughter’s boyfriend. He had been brought up in Abernethy and his mother still lived there. I often had to drive him home when he missed the last bus and would drop him at his house on Perth Road. On one occasion I mentioned what a nice place Abernethy was, and he pointed out that I really hadn’t seen the best bit. He directed me up through the village with the tower, church and monument. I was smitten!

There was a cottage on Main Street for sale, a bit run down, but now that I was on my own with my dogs and cats it would be ideal.

I moved in in December 1995. Freezing, and only a coal fire for heat , but I was never happier. My neighbours were very kind and helpful, and one even gave me a gas canister fire, which was a blessing when coming into a cold house after work.

Soon I was going to functions in the village and getting to know people. There were coffee mornings, quizzes and sales, and in June there was the Gala. 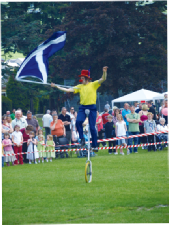 A whole week of community activities culminating with the crowning of the Gala Queen in Powrie Park. What a show that was! Bagpipes and Scottish dancing, dog show, pony rides and majorettes, all the fun of the fair, and in the evening a dance in Williamson Hall. This was village life at its best. I loved it and knew I had done the right thing coming to Abernethy.

The first few years were spent slowly improving the house and garden, and there was the hair-raising day when I got a phone call at work from the police to say that part of the roof had blown off the cottage and I had better get home. On turning into Main Street I saw that the road was closed and emergency vehicles were at the house. The chimney had been made unstable by roof cladding having being blown against it. Thankfully no one was injured. There followed many weeks when I “camped out” in the house and my long suffering neighbours had to put up with all the noise and vans and workmen while the roof was repaired.

I lived in the cottage, with various dogs and cats, and the children coming and going as their jobs allowed, for eight years. It was a very happy time and although I was often alone, I was never lonely, kept busy with the garden and some very amateur DIY.

In 2003 I remarried and “ moved up in the world” to a new build house in Brandywell Road. It was another December move, but at this time at least, to a lovely warm house, although we were surrounded by a sea of mud! We were the second of the new houses to be occupied and had a long time to wait until there were proper pavements and paths. It was all very exciting fitting out a new house and designing the garden.We couldn’t have wished for nicer neighbours and it was a delight to see youngsters growing up around us. A new area of Abernethy and a new life for me.

I lived there for nine years and then had another move to live nearer my daughter when my marriage split up. Leaving Abernethy was a real wrench but I kept in touch with friends and got all the village news from them. Eventually I was able to consider moving back and was extremely lucky to find the ideal house within days of starting the search. By August 2015 I was back in the village cosy and comfortable, and secure, and very very happy.

I know I am a “New Abernethian” but I feel as if the village is in my blood and I hope I will never have to leave here; for all its quirks and idiosyncrasies it’s the only place I want to be.