FURTHER THOUGHTS OF ANOTHER INCOMER 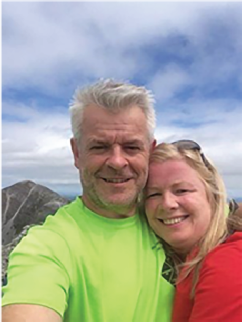 It is easy to concur with everything Angus Macintyre had to say about all things Abernethy in the September edition, which leaves one pondering for long periods what to write that isn’t just repetition, or worse still plagiarism! Jeez this is just like being back at college, why did I ever agree to putting some thoughts on Abernethy from the incomer’s perspective in an article?

It's 10 years since we moved into Struan House, better known and always referred to by Abernethians as “Hilda and Bobby’s hoose”. We came across the property by chance, having viewed another property that day and popping into The Crees to mull over the pros and cons thereof. Much to our surprise it was a very well-kent face that served us from behind the bar, big Brian Johnston. We knew each other well from our time in Kinross, yet I had no idea he had settled in Abernethy. It was Brian who pointed us in the direction of Struan House, but more importantly he gave us a first insight into life in Abernethy as we chewed the fat over times gone by and the potential of setting up home in Abernethy. We miss Brian immensely and won’t forget the kindness shown particularly to Jennifer and Rebecca in giving them part-time jobs in the pub.

So it was we went on to meet The Chair, I mean Hilda Clow, the oracle of Abernethy, or so it seemed to us. We have since learned there is an immense history to Abernethy both recent and ancient and many experts within the village to tell the tales. Hilda however is a good listen and has often served up chapter and verse when we have wanted to know about different aspects of the village. Never before had we purchased a house and struck up such an immediate rapport with the seller. A friendship was formed that endures, the first of many in Abernethy. One character we would have loved to have met and heard so many tales about was Hilda’s husband Bobby, however if it weren’t for his passing, we wouldn’t have ended up in Struan House nor had such an insightful introduction to life in the village.  As time has gone on, I find myself agreeing more and more with Angus, plenty of characters and plenty of cheery banter in Abernethy.

I mentioned Kinross where we have spent a large part of our lives. One of the aspects of Abernethy which really made us feel comfortable right away was the similarities to life in Kinross when it was a much smaller town. That is until, ironically, “the incomers” came and changed that feel. There is a friendliness where people greet each other in the passing, the different clubs and organizations and events for all age groups, the community spirit, the wee shop, the open countryside, the pubs and the locals in them, the farming influence, the museum, Earnside coaches passing by or parking up, the fish van and even The Village Crier all bore a remarkable resemblance to what we had experienced before and helped us to quickly settle.

Getting involved in community life is all important to settling in, becoming a kent face and I suppose to being accepted. For me it was joining the badminton club, aerobics classes at the Williamson Hall, the hill race, the wee dig, open gardens and a one and only entry into the Abernethy hill race and for Doreen along with the aerobics and very occasional badminton game, it was the museum and the cinema. These all introduced us to the social side of life in the village, be it nights at the pub, race night fundraisers or comedy nights up in the hall, so it was we got to know, got to enjoy and grew to care about the community we live in. I know there is more it has to offer and there is more to explore and get involved in, but the pace of life in Abernethy teaches you it doesn’t all have to be done today.

For many a community the advent of this horrible pandemic has been a real setback, however I would like to finish with what we have experienced and observed as benefits and positives during such dark times. Walking and exercise, the village has many an active enthusiast in this respect, however, to observe families out together as a unit talking and enjoying the countryside, exploring areas they might never otherwise have found the time  to do, feels right and what life should always have time for. We enjoyed many a daily walk, managing never to repeat the same route twice over some two and half months of lock-down. Okay, we may have pushed the boundaries slightly in terms of time you were allowed out for exercise, however there were only benefits to be had. Being out and seeing the many different perspectives of the picturesque village, its countryside and lots of wildlife was not only good for one’s physical health, but mental well-being also. Good habits have been formed as a result.

Neighbours, everybody needs good neighbours. It’s the luck of the draw and often you will find there is a high turnover in this respect, or that they want to keep themselves to themselves. We have been lucky, surrounded by neighbours willing to chat, offer a lift or a helping hand, but mainly there to support each other when required. The pandemic has drawn us that bit closer, rather than rushing off to work with a cursory greeting, our paths cross more regularly and there is more time for a chat and a laugh. Whether it’s the news from the pews (you’d be surprised!) or an irreverent look at crime prevention, tips on horticulture, to shared boundaries or even an insight into deep space, there is always plenty to discuss. All the funnier when it’s beer o’clock! But more often it is about family and how their lives are progressing, the latest update on the activities of the children and what advice and support may be required.

All in all, life in Abernethy suits us down to the ground. Hopefully as life eventually returns to normal there will be the opportunity for the many recent incomers to involve themselves in the life of the community. In our homes and as members of our community we must remember, we are but custodians …… right Doreen where’s the for-sale sign? Once they’ve read this….. we’ll be driven out of town!!