DO YOU HAVE A STORY TO TELL?

2022 is Scotland’s Year of Stories, and everyone has a story.

At the Museum of Abernethy we like to collect tales old and new, such as the (old) one about the farmer who, while visiting relatives in New Zealand, attended an agricultural fair and chanced upon a fellow Scot who had emigrated there. The visitor happened to mention that his farm’s water supply had recently become a bit unreliable, but that he couldn’t find the holding tank to investigate. It then transpired that the émigré had farmed the very same Perthshire property at one time, had installed said tank, and so was able to give him precise directions. Sometimes you have to go away…

In April, as I write, we’re looking forward to being open for a whole season starting May 7th, Covid permitting, and we have exciting new displays with their stories to tell. It kicks off on May 7th and 8th: tales of a spooky nature with Gary and Lynne Knight (although by the time you read this we’ll have been open nearly a month). 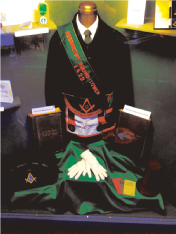 As for static displays: firstly, and all the rage just now, we have the story of witches, including some of Abernethy’s, and the whole witch-hunting era which loomed especially large in Scotland. There are of course lots of myths about the subject, so come along, by broomstick or otherwise, and get a more balanced, historical view. Display researched and compiled by Audrey Clark.

Then, filling a gap in many peoples’ knowledge, including mine, we have the story of Aberargie and its mills, satanic or otherwise. This welcome addition to our offerings is the responsibility of Irene Hallyburton, who has also agreed to join the Museum team. Does she know what she’s letting herself in for?

The third full new display is on Freemasonry and the establishment of the Abernethy lodge. Will any secrets be given away, I wonder (well, I don’t really). You might be surprised however at some of the famous people in history who were Masons. (Just don’t confuse Masonic lodges with Orange lodges, as some people do. They’re different animals). Jimmy Swan has compiled this one—spoiler alert, he knows a funny handshake or two.

There is also a sort of half-display which is new. To explain, we recently came into the possession of some aircraft parts, which were discovered in the Nethy Burn. These belonged to two planes which crashed during the Second World War close to Abernethy. One was a Spitfire, which collided with another Spitfire during training, and the other was a Lysander, probably flown by Polish troops stationed locally, about which we otherwise know nothing. These remnants are on display but, since our knowledge is limited, any stories or even rumours that you have heard would be most welcome to help fill out the picture.

Finally, our display on Abernethy’s two naval surgeon brothers has a second season. Come and see instruments that were used during the Napoleonic wars to patch up or amputate, without anaesthetic, of course. Horror stories there—if only these items could talk!