Even the smallest horse is stronger than their owner. Before they can obey their rider they have to want to please and understand what they are being asked to do. Kashal has learnt;  ‘Walk on, Trrrot, Whoa and Stand’; which were very helpful for his next lesson, ‘Going in the Trailer’

At any horse event there is often a horse that has decided it does not want to go into its trailer and a red-faced owner getting more and more embarrassed. Often there are people giving helpful advice and making things worse. We would always help if asked but feel it better to let the owner get on with it. We have been there and we sympathise. The first time we went to Tentsmuir it took two hours to load the ponies for the return journey.

I have to admit that we feel a bit smug when we can rely on Bella, Flora or Fenella to stroll quietly up the ramp into their trailer but this is because of the hours spent at home feeding them in the trailer until they became used to it. We want Kashal to be relaxed about loading but we have to persuade him into it before we can start feeding him in the trailer.

Step 1. We opened the trailer right up and Kashal watched Fenella walk through twice. I don’t know if this helped as he hesitated a little until the combination of seeing his feed bucket and hearing Kirstie say, ‘Walk On!’ encouraged him to walk through the trailer and be rewarded with his feed bucket. The next time we did this he was quicker and the third time there was no hesitation. 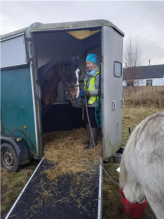 The next step was to stand in the trailer and eat his food. Fenella no longer walked in front but she stood and ate her feed next to the trailer ramp so he felt safe. This was easy for him. He did it perfectly.

Step 3. The Breast Bar was in place and when his feed was finished, he had to wait until it was released before he could stroll out.

Step 4. Once he was eating the back ramp was lifted up behind him. He was a bit surprised when it banged behind him but Kirstie was there to reassure him.

We will do this regularly through the winter and then he will actually get towed. His first trip will be short and Fenella or Bella will be in the trailer with him. Flora’s first trip was to Aberargie, round the roundabout and home.

It is a long time before he will actually be going anywhere but we are laying foundations for life.