THE SLAVE TRADE AND ABERNETHY

Over the last few months the way the black people in the US have been treated by the police and by society at large has come to a head. This has rekindled the issue of the slave trade and its long term after effects. As it was a money maker for some folks in Scotland this got me thinking how close did the slave trade come to Abernethy?

So I started to delve into the records of the people in Scotland who were well known to have been involved in the business. How close can I get to our village? Very close!

All around Scotland there are mansion houses, businesses and organisations that have been involved directly or indirectly with the slave trade. West coast main rail line, Aviva Insurance Company, Royal Bank of Scotland. Lloyds Bank and monuments to the great and good, all from monies made off the backs of the slaves.  Five miles west of Abernethy and about the same distance east of the village are two examples of families who made a fortune from sugar, cotton and tobacco picked and processed by slaves.

Let’s go west first to the small village of Bridge of Earn and specifically Kilgraston House. Kilgraston House  was owned by the Grant family, a Scottish family that go far back into the mists of time. The earliest records of the lands of Kilgraston date back to the 13th Century when it was called Gilgryston. There are conflicting records as to when the house was built. One record states it was completed on 1st January 1800 and other records tell us it was purchased by John Grant, the eldest son of Patrick Grant of Glenlochy, towards the end of the 18th Century from the Murray and Craigie families. The records tell us that John Grant made his wealth in Jamaica, where he was a member of the Assembly, eventually succeeding Thomas French as Chief Justice of that island in January 1783, a post he held until 1790. Funny that the official history doesn’t tell you about the family’s involvement with the slave trade; very convenient.

When the slave trade was abolished the slave owners were up in arms. They demanded compensation from the British government and lo and behold they got it. The British government paid out 17 million pounds, 20 billion in today’s money, as compensation for them losing such a lucrative money maker. Francis Grant of Kilgraston was one of those claimants.

Firstly let me set the scene on how the system worked. There were three brothers named Stirling who were well into the slave trade and ran a very well organised operation. You have to remember slaves never set foot on British soil, only the by-products of slavery, sugar, tobacco and cotton. The Stirling brothers had it sown up, one brother was stationed in Africa, Sierra Leone, where he was involved with the capture and corralling of the men, women and children ready for transportation. Brother two was in Jamaica receiving the slaves packed in the ships hoping  most of them had survived the journey and brother three was in Britain receiving, selling and distributing their ill gotten gains to all corners of the country. It was called “The Triangular System.”

Lets get back to the Grant family.

Francis Grant was the main man when it came to the family involvement. Francis succeeded his brother as Chief Justice of Jamaica in 1793, taking over from John as previously stated. Francis was also the slave factor at Montego Bay from 1789 – 1792, so as you can see he was in it up to his armpits.

Francis was also a slave owner of Blackness estate in Westmoreland, Jamaica and owned 264 slaves as well as all his other interests, pretty much coining it in. Francis died in 1818 and  his executors, the other family members including his wife Anne Oliphant, whom he had married in 1793, were left to make their claim for compensation from the British Government when slavery was abolished. Their claim details on the 12th October 1835 amounted to 264 slaves worth £4511. 12s 10d, £640,562 in today’s money.

After the payout many of the companies and individuals involved in the trade invested elsewhere, as previously stated.

The Kilgraston house mentioned before was destroyed by fire in 1872.

Next time we will be between Newburgh and Auchtermuchty.

THE SLAVE TRADE AND ABERNETHY

And so the troubles and the black/white divide in the USA rumbles on. I sometimes think we live in a wee protected bubble here in Abernethy, sheltered from the worst that society can dish out.

Before we go east between Newburgh and Auchtermuchty, I would like to share with you a few statistics. While the British Government were seen to be leading the way on the abolishing of slavery, 37 members of the House of Lords and 80 MPs were profiting from slave ownership. At the height of the trade there were 800,000 slaves spread over the Caribbean and the American southern states and 40,000 slave owners spread across the globe. When the end came these people were compensated and compensated sweetly for their loss of income as slave owners.

I have been trying to find a slavery connection with Abernethy but happily no luck so far. However, at the height of the trade, handloom weavers were producing rough or coarse linen also known as “slave linen”. Did these weavers know where their product was going  Maybe they did and, like the vast majority of society, thought it an acceptable way of making a living and considered the black man or woman an inferior being born to be a slave.

And so to Taylor Cathcart of Pitcairlie House, situated between Newburgh and Auchtermuchty.

The lands of Petcarlings originally formed part of the Barony of Abernethy. In 1312 the lands passed into the ownership of the Leslie family. The house was bought by Colonel James Cathcart in the mid 18th century and his family retained the estate until the mid 1960s. There were several notable members of the family, including Major James Cathcart who had a distinguished military career in India; Captain Robert Cathcart who served with distinction under Nelson at the Battle of the Nile and Robert Cathcart who was appointed Vice Lieutenant of Fife in 1886. Ah! Strangely no mention of Taylor the slave owner/manager in the family history. Well let’s correct that.

Taylor Cathcart was born 1777, son of Colonel James Cathcart mentioned above. Taylor was a plantation manager on Grandvale plantation in 1812 which was owned by John Cunningham of Craigends, Renfrewshire. On the 29th May 1812 John Cunningham wrote “Dear Taylor, I have had the pleasure of receiving yours accompanied by a list of negroes and stock at Grandvale – I am happy to observe that the increase in births is likely to keep pace with the decrease occasioned by the deaths of the old and infirm people and I am so pleased to you that you afford every comfort to the women in a state of pregnancy. Indeed, I suppose you will always be disposed to do everything in your power for the comfort of all the slaves. It will be a very satisfactory and consolatory reflection to you after you have relinquished the management and retired from that situation in life”. Was he moving up and becoming an owner rather than a manager?

Just last month Seagram’s liquor heiress Clair Bronfman was charged with various crimes, one of them sex slavery. Well! On it goes into the 21st Century. 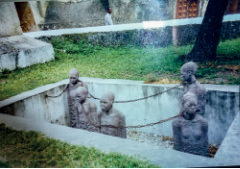